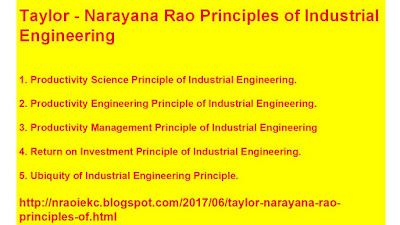 There are opportunities convert some  internal operations  to external setup operations. For example, one can avoid  the internal setup time involved in shut height adjustments for the press dies, by standardizing the  die height and by attaching blocks or shims to smaller dies. Another simple conversion is to preheat dies for die-casting, which eliminates heating the die by trial shot after its was placed in the machine.

Shut Height -  Distance between the upper dead center and the lower dead centre in a die.

Standardizing the shape and size of dies can reduce setup times considerably. Shape standardization is wasteful, however, because all dies would have to confirm to the largest size used, which would increase costs unnecessarily.
Function standardization, on the other hand, requires only uniformity in the parts and features necessary for setup operations. For example, adding a plate or block to the attachment edge of the die standardizes the dimensions of that part only and makes it possible to use the same clamps in different setups. The functions identified by Shingo in his book are clamping, centering, dimensioning, expelling, grasping, and maintaining loads. The engineers or industrial engineers must study various dies and standardize the features of the die that necessitate changes.

Bolts are most commonly used to attach the die to ram and machine body, but tightening bolts can be very time consuming. Normally, about with fifteen threads must be turned fourteen times before it is actually tightened on the last turn. But Shingo's insight is that only the last turn tightens the bolt and the first loosens it – the other thirteen are wasted motion. If the purpose of the bolt is simply to fasten or unfasten, it should be just long enough for fasten in one turn. A bolt with one turn possibility is called a functional clamp by Shingo. One-turn functional clamps include the I- slot method, the pear shaped hole method, and the external clamp.
Threaded screws are by no means the only way to secure items. There are methods and industrial engineers have to explore then and examine them. One touch methods using wedges, cams, and clamps or springs reduce setup times considerably, as do interlocking improvements that simply fit and join two parts together. These methods can reduce setup times to seconds.

In clamping methods, the direction and magnitude of force required in the situation are critical considerations. An analysis needs to be done to find what is need to design the clamping method. At Mitsubishi Heavy Industries, for example, stoppers were screwed to each of the spindles of a boring machine in a difficult and time-consuming way in extremely cramped conditions. An examination showed they are not necessary. This operation was improved by cutting grooves near the end of the spindles and attaching three springs around the edge of each stopper. When the stopper was placed over the end of the spindle, the springs snapped into the groove, and the spring tension held the stopper in place. This shortened the time for securing and removing stopper considerably.

While the work piece attached to one jig is being processed, the next work piece is centered and attached to a second jig that is easily mounted on the machine for processing. This is using a duplicate jig to load the center the workpiece as an external operation.

For example, on  a profile milling machine, blocks for television picture tubes were being made. Marking off for concurring and setting heights for the template and the material was done as internal setup on the bed of the machine. Because of the many curves in the blocks, this was a complicated and time consuming operation. Two jigs were constructed.  While one item is machined, a template and next work piece are attached to the other jig, then centered and set for proper height.  Clamps are used to mount the jigs quickly and easily on the table. Intermediate jigs can also be used on large process with multiple dies of different sizes and heights. In that situation, they are used to move the internal centering and securing operations off the machine. With this improvement, the press needs to be turned off only while a forklift switches the intermediate jigs with the dies already mounted.

Operations on plastic molding or die-casting machines and large presses invariably involve setup work on both sides or at both the front and back of the of the machine.

If only one worker performs these operations, much time and motion are wasted as he goes from side to side or back and forth around the machine. But when two people perform the parallel operations simultaneously. Setup time is usually reduced by more than half, due to the economies of movement. The assistance for these operations can be provided by even the foreman.

Typically, adjustments and trials runs account for 50 to 70 percent of internal setup time. Their elimination products tremendous time savings.  The assumption that adjustment is an unavoidable leads to unnecessarily lengthy internal setup times and requires a high level of skills and experience on the part of the operator. Adjustments can be eliminated, however, if a gauge is used to precisely determine the correct position of the limit switch.  The first setup in doing away with it is to make calibrations which eliminate the need to rely on intuition. If an approximation is all that is required, a gradated scale may be sufficient, but it cannot do away with adjustments altogether. Greater precision is achieved using a dial gauge magnescale, or numerical control device.

Of course, the best kind of adjustment is no adjustment at all. For example, the least common multiple’ (LCM) system is based on the principle and that adjustment can be eliminated entirely when the number of setting is limited and unvarying.

In one plant, a limit switch was used to set the end point in machining shaft. Since there were five shaft lengths the switch had to be moved to five different location. It could not be positioned correctly without as many as four trial adjustments every time the set up changed. By installed limit switches at the five sites, each equipped with an electrical switch that is supplied with current independently of the other switches, this problem was eliminated Now setup is performed by flipping a switch.

A second example of the LCM approach:. In this operation, a drill was used to countersink a hole for a stationery screw in a motor core shaft. Stoppers had to be repositioned for eight different lengths which made repeated test runs and adjustments necessary. The adjustments were eliminated by mounting stopper plugs of eight different heights on a single plate. To change operations, to plate is simply rotated to set the stopper at the desired height and then secured. This one-touch method reduced internal setup to a matter of seconds.
The LCM approach as well as the one-touch and interlocking methods simplify setting or positioning and eliminate adjustment. For example, some presses are sold with adjustable shut heights because different companies have different requirements. This does not mean, companies actually operate with dies of varying shut heights. These companies should either standardize the heights or purchase presses customized for their needs. The same faculty logic is evident when expensive presses are equipped with motorized adjustable shut heights and highly accurate adjustment functions. When there is no need for adjustments, why invest in such functions with it is much more economical to eliminate adjustments through standardization.

Although changing small blades, jigs, dies and gauges does not pose much of a problem, mechanization is often essential to efficiently move large dies, casting dies, and plastic molds. Oil and air pressure can be used for convenient one-touch attachment of dies.
Investment in mechanization should, however, be considered very carefully. Recently, many companies have standardized the dimension of clamping plates and finished them to a high degree of precision. One-touch clamping is then performed by inserting these plates into special clamping fixtures. However, only the die actually forms the product considering the purpose of the operation, it is wasteful to finish clamping to a high degree of precision.
Mechanization should be considered only after every effort has been made to improve setups using the techniques described. The first seven principles can reduce a two-hour setup to three minutes, and mechanization will probably reduce that time only by another minute.
SMED is an analytical approach to setup improvement of which mechanization is only one component.
One should attempt to mechanize setups after they have first been thoroughly streamlined by applying the SMED principles.