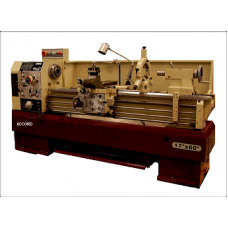 The genius in F.W. Taylor resulted in proposing productivity improvement through machining time reduction (machine time reduction) and man time reduction as the core activity which will give cost reduction and income increase (to both employees and companies, this labor and capital).

Machining time reduction can be achieved by improving each of the elements that are used in machining. Taylor investigated each machine element - machine tools for power and rigidity, tool materials and tool geometry, work holding, use of coolant, cutting parameters (cutting speed, feed, depth of cut) and developed data and science for each element and increased productivity of machining. The framework laid by Taylor is followed even today and productivity improvement of machining is occurring.

278 The cutting speed of a tool is directly dependent upon the following elements. The order in which the elements are given indicates their relative effect in modifying the cutting speed, and in order to compare them, we have written in each case ﬁgures which represent, broadly speaking, the ratio between the lower and higher limits of speed as affected by each element. These limits will be met with daily in machine shop practice.

279 (A) The quality of the metal which is to be cut; i.e., its hardness or other qualities which affect the cutting speed.

280 (B) The chemical composition of the steel from which the cutting tool is made, and the heat treatment of the tool.

Proportion is as 1 in tools made from tempered carbon steel to 7 in the best high speed tools.

282 (D) The shape or contour of the cutting edge of the tool, chieﬂy because of the effect which it has upon the thickness of the shaving.

Proportion is as  1 in a thread tool to 6 in a broad nosed cutting tool. ,

283 (E) Whether a copious stream of water or other cooling medium is used on the tool.

Proportion is as 1 for tool running dry to 1.41 for tool cooled by a copious stream of water.

284 (F) The depth of the cut; or, one-half of the amount by which the forging or casting is being reduced in diameter in turning.

285 (G) The duration of the cut; i. c., the time which a tool must last under pressure of the shaving without being reground.

287 (J) The elasticity of the work and of the tool on account of producing chatter.

Proportion is as 1 with tool chattering to 1.15 with tool running smoothly.


The first scientific studies of metal cutting were power requirements for various operations so that steam engines of appropriate size could be selected for tools. A number of researchers constructed crude dynamometers and conducted systematic experiments to measure cutting forces. The best known was E. Hartig, whose 1873 book  was a standard reference on the subject for many years. Development of more advanced dynamometers occupied researchers after Hartig's book was published. In addition, several studies of the mechanism of chip formation were carried out, most notably by Time, Tresca, and Mallock. By carefully examining chips, these researchers recognized that chip formation was a shearing process.

In 1868 Robert Mushet, an English steel maker, developed an improved tool steel. It was a Tungsten alloy which proved to be self hardening. Mushet  took extraordinary measures to prevent the theft of his recipe and the process he used is unknown to this day. The  material was  superior to carbon steel for cutting tools and was widely used in both Europe and America.


As foreman of the machine shop, Taylor felt that shop productivity could be greatly increased if  a quantitative understanding of the relation between speeds, feeds, tool geometries, and machining performance can be established and the right combination of cutting parameters are specified by managers and used by machinists. Taylor embarked on a series of methodical experiments to gather the data  necessary to develop this understanding. The experiments continued over a number of years at Midvale and the nearby Bethlehem Steel Works, where he worked jointly with metallurgist Maunsel White. As a result of these experiments, Taylor was able to increase machine shop productivity at Midvale by hundred percent even though in certain individual jobs and machines, productivity increases was as much as a factor of five.  One of Taylor's important practical contributions was his invention of high speed steel, a cutting tool material. The material permitted doubling of cutting speed, which in turn permitted doubling spindle speed for the same diameter of the work and thereby increase in feed which reduced machining time.

Taylor also established that the power required to feed the tool could equal the power required to drive the spindle, especially when worn tools were used. Machine tools of the day were underpowered in the feed direction, and he had to modify all the machines at the Midvale plant to eliminate this flaw. He also demonstrated the value of coolants in metal cutting and fitted his machines with recirculating fluid systems fed from a central pump. Finally, he developed a special slide rule for determining feeds and speeds for various materials.

Taylor summarized his research results in the landmark paper On the Art of Cutting Metals, which was  published in the ASME Transactions in 1907. The results were based on 50,000 cutting tests conducted over a period of 26 years. Taylor's also indicated the  importance of tool temperatures in tool life and developed the famous tool life equation.  His writings clearly indicate that he was most interested in efficiency and economy in his experiments and writings.

Machine tools built after 1900 utilized Taylor's discoveries and inventions. They were designed to run at much higher speeds to take advantage of high speed steel tools. This required the use hardened steel gears, improved bearings and improved bearing lubrication systems. They were fitted with more powerful motors and feed drives and with recirculating coolant systems.

The automotive industry had become the largest market for machine tools by World War I and it has consequently had a great influence on machine tool design. Due to accuracy requirements grinding machines were particularly critical, and a number of specialized machines were developed for specific operations. Engine manufacture also required rapid production of flat surfaces, leading to the development of flat milling and broaching machines in place of  shapers and planers. The development of the automobile also greatly improved gear design and manufacture, and machine tools were soon fitted with quick-change gearing systems.  The automotive industry also encouraged the development of dedicated or single purpose tools. Early examples included crankshaft grinding machines and large gear cutting machines. It led to the development of transfer machine. An in-line transfer machine typically consists of roughly thirty highly specialized tools (or stations) connected by an automated materials handling system for moving parts between stations. The first was  built at Henry Ford's Model T plant in Detroit. . Transfer machines required  very large capital investments but the cost per piece was  lower than for general purpose machines for the  production volumes of  hundreds of thousands required in auto industry.

In the 1930's a German company introduced sintered tungsten carbide cutting tools, first in brazed form and later as a detachable insert. This material is superior to high speed steel for general purpose machining and has become the industry standard.

A great deal of research in metal cutting has been conducted since 1900. A bibliography of work published prior to 1943 was compiled by Boston,  Shaw and King.   The shear plane theory of metal cutting was developed by Ernst and Merchant  and provided a physical understanding of cutting processes which was at least qualitatively accurate for many conditions. Trigger and Chao  and Loewen and Shaw  developed accurate steady-state models for cutting temperatures. A number of researchers studied the dynamic stability of machine tools, which had become an issue as cutting speeds had increased. This resulted in the development of a fairly complete linear theory of machine tool vibrations. Research in all of these areas continues to this day, particularly numerical analysis work made possible by advances in computing. All these discoveries and their implementation in machine tools gives higher productivity in machining.

New tool materials were invented. A variety of ceramics are currently used for cutting tools, especially for hardened or difficult-to-machine work materials.  Ceramic and diamond tools have replaced carbides in a number of high volume applications, especially in the automotive industry.  Carbides (often coated with ceramic layers) have remained the tool of choice for general purpose machining. There has been a proliferation of grades and coatings available for all materials, with each grade containing additives to increase chemical stability in a relatively narrow range of operating conditions. For many work materials cutting speeds are currently limited by spindle and material handling limitations rather than tool material considerations. Dozens of insert shapes with hundreds of integral chip breaking patterns are available now.


Economic Considerations are important in designing the  machining process of a component. Each operation done on a machine involved number of decisions. There is more than one approach for doing an operation and each approach will have as associated machining time, part quality and cost of machining. An effective and efficient methodology is to be employed to attain the specified quality of the operation with the least cost.

The machining cost of an operation on a component is made of several components. They include machine cost, tool cost, tool change cost (includes set up), handling cost, coolant cost etc. Some of these costs  vary significantly with the cutting speed is different directions. At a certain cutting speed we get the minimum cost and at certain other cutting speed we get the least machining time. There is a need to calculate these minimum point cutting speeds for each work material, tool material and machine tool combinations. F.W. Taylor developed slide rules for this purpose. Now those slide rules are not in place, but machining handbooks and machine tool/cutting tool manufacturers provide guidance. Process planners and industrial engineers need to do the required calculations depending on the trial production within their plans.

Time study used for machine work study has to determine these time times from formulas as well as time study observations for the existing way and proposed way to validate the time reduced by the operation analysis based on operation study and time data.

Industrial engineers must have knowledge of maximum permissible depth of cut. feed and cutting speed.